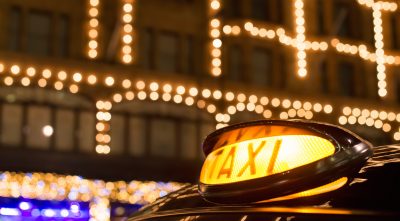 The latest taxi news in Bristol this winter

Several pieces of taxi-related news have recently hit the wire in the Bristol area. They involve dangerous situations as well as a feel-good Christmas story.

According to a private hire taxi driver, hundreds of Bristol-based Uber drivers are causing dangerous situations on the roads due to not being qualified enough to operate in the city. Ammran Ali said that many Uber drivers are getting approved in places like South Gloucestershire, where they don’t need to pass a test showing that they know Bristol streets. As a result, those drivers are consulting satellite navigation systems, which are distracting them from the road.

A scary taxi-related story resulted when Alice England, while riding a taxi, saw her stolen bike, jumped out of the vehicle and, while trying to get her bike back, was punched in the back of the head and threatened with concrete. She had been partying at St Pauls Carnival and was returning from it when she saw her bike. The taxi driver patiently waited for her to return with it.

Ammi, a 9-month-old Staffordshire cross, was hit by a Bristol-based taxi, and the scared and hurt puppy ran off into the night, leaving Toni, his owner, devastated when she couldn’t find him. However, the two were finally reunited. She wrote on a Facebook post, “FOUND … thank you to everyone who shared my post.”

A Torquay-based taxi driver was found to have received three speeding offences but had not reported them within five working days as regulations require. As a result, John Robert Cree’s license was revoked. Two of the three violations occurred near his home in Torquay while the third took place when he was returning home from Bristol; he had driven 57 mph in a 50-mph zone. Cree was not serving as a taxi driver while committing those violations.

For the third year running, Uber has announced that it will provide NHS staff two free rides or meals worth up to £10 apiece in the days surrounding Christmas as a way to thank the organisation’s staff for working tirelessly during a time when so many others get time off.

At A Taxis of Bristol we wish you enjoyable Christmas. Eat, drink and be merry, see family and friends but also ensure you stay safe and don’t end up being part of a newspaper headline. Book your taxi over Christmas time so you can rest assured that you will be safe and know when to expect pickup, drop off. Take the weight off your mind with our fully trained staff and excellent disabled access taxi fleet.